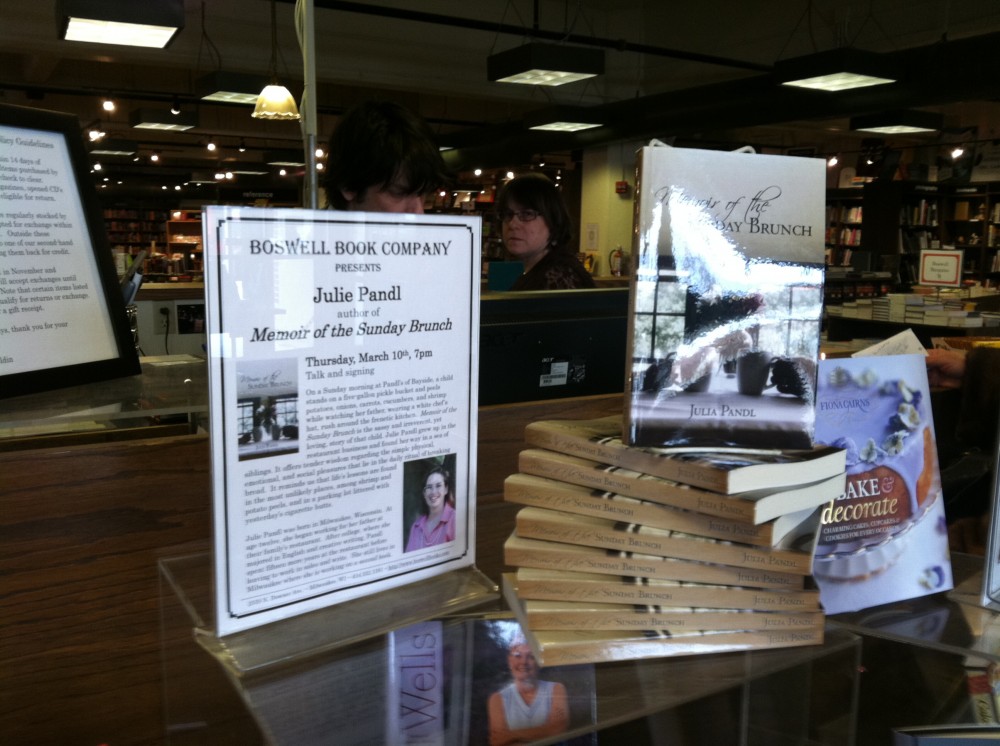 Memoir of the Sunday Brunch is now available at Boswell Books on Downer Avenue, the Milwaukee WaterFront Deli, the Boelter SuperStore, and Fitzgerald’s Pharmacy.

The book is online with an Amazon rating of 60,779. Funny how hilarious and humbling are such great Karmic pals. It’s on the shelves—last name beginning with “P”—Plath, Plato (Cher, Bono, so much for originality), Poe, Potter. Not bad company there. It’s in the trunk of my car, next to the loose change, snow pants, ski poles, and a pair of really expensive sunglasses that belong to I-Have-No-Idea-Who. And, most importantly, it’s in hands.  It’s in the hands of family and friends, and it’s in the hands of strangers, which frankly, has been scary enough to produce a bit of a rash on my forehead.

Press release—check, responses—zero, though there was the tiniest blurb in the Cue section of yesterday’s paper, for which I will take full credit.

Thinking about stalking Oprah, but I’m scared of Oprah for reasons I can’t quite explain. It could be the simple fact that my Mac recognizes her name. It does not underline it in red the way it does Degeneres. This is unnerving for some reason. Oprah is not in my Webster’s—I looked. It goes right from Oppunger; that which opposes, to Ops; strength, riches, Roman Goddess of the harvest. There’s something ironic about the fact that, if Oprah were to appear in my Webster’s, she would land atop a word that in Latin means “Plenty,” and in Sanskrit means “Goods and Property.”  Hmm…perhaps I will start stalking her.