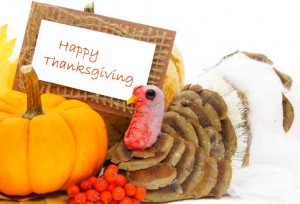 Thanksgiving is my favorite holiday because it involves food, drink, family, and friends—no gifts. It’s a stress free celebration that reminds us to do what we can never do often enough—give thanks. I like it, too, because it’s a discrete little holiday, disguised as a regular old Thursday. Thanksgiving arrives bearing the simple offerings of appreciation and gratitude. It’s conversation. It’s football. It’s unzipping your pants, and taking a nap on the couch.

Enjoy it now, folks, because as much as Thanksgiving grounds us in the intangible bounty of life, every year—just like clock work—his high-maintenance big brother is going to roll up right behind him. Where Thanksgiving is satisfied with a smile, a hug, and maybe a pie, Christmas requires a red carpet, a tree, a Santa Claus, and a choir of angles. And Christmas seems to arrive earlier and earlier every year, like a houseguest knocking on the door while you are still in the shower. Has it always been this way? When did Christmas become so obnoxious?

I wonder…if the three wise men had to pick their way through the holiday trappings we have set for ourselves, would they even make it to the manger? And would they walk in with gifts of gold, frankincense and myrrh? Or would they roll up in a Mini Cooper with a plasma screen TV, a X-Box 360, and a Ballyhoo Sensory Toy? Or maybe they would find themselves stuck at the mall, in the frankincense and myrrh store, panic stricken because there are now ten thousand different kinds of frankincense and myrrh, each with its own distinct decorative label, scent and celebrity endorsement. What if the person who works the frankincense and myrrh counter is out sick? Or what if they’re on their IPhone, chatting with a friend about last night’s episode of Criminal Minds? Or what if they just vaporize, as sales people are apt to do this time of year? Imagine the pressure on those wise men. Imagine the timetable. Consider the recipient.

I never would have made it as one of the wise men (or women).  I would have been the one saying, “What star? I don’t see a star.” Sure, I can bear gifts with dignity and grace, but nothing about they way I buy gifts is dignified or graceful. See, I hate to shop. For me, it’s more of an episode for me than it is an experience. The minute I set foot in a store I become riddled with every physical, psychological and social disorder known to man. Where I used to mumble under my breath about other meandering shoppers, and lethargic or nonexistent sales people, I know speak out loud in what some people might consider violent and irrational tones. I’ve diagnosed it as “Christmas turrets.” C’mon, admit it, you have it too. It’s triggered by things like television ads, Henry and David gift baskets—the ones with the fruitcake, and stores that burn loads of potpourri, like you’re chewing your way through a basket of pinecones.

This “Christmas turrets” makes me wonder…how will I carry the gifts of the Magi back into this holiday season? Where will I find the gold, frankincense and myrrh? Can I keep a lid on big brother Christmas—the noise, the chaos, the traffic, the lines, the catalogues, the expletives? If the spirit of giving is available at Macy’s, will the salesperson be able to tell me where to find it? I doubt it.

I think, I’ll take my cue from my humble friend Thanksgiving, and have a hug, and have some pie. Then maybe I’ll do as the wise men did—look. I’ll look at the recipient, and I’ll find the gift.