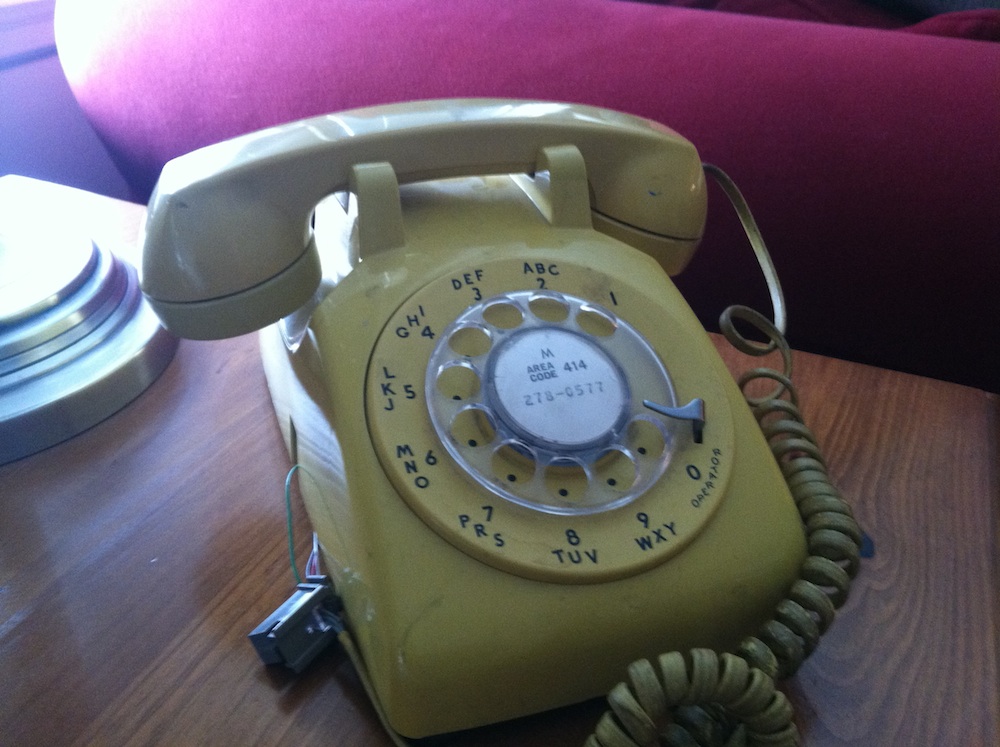 Memoir of the Sunday Brunch is now available on Amazon Create Space. For those of you who are Amazon members, the traditional Amazon site will be up within five to seven business days. Kindle version to follow in four to six weeks. YAHOO!! What a ride, and, if you’ll excuse the Carpenter’s reference, it’s only just begun.

Here’s a little story from the adventures of promoting a book using, among other things, social media. While putting the final touches on www.juliapandl.com, I ran into a snag that required a trip to the Apple store, and an appointment at the Genius Bar. Genius Bar—Genius name. The mere fact that I am allowed to belly up to such a place does something wonderful for my self-esteem. You should try it sometime.

A few days earlier my friend, Gerry, had brought over a phone that she picked up at a garage sale (just for kicks). It’s a yellow, rotary phone circa 1972, perhaps, ‘73; it’s hard to say. For those of you who remember, it’s the phone that sat, and stayed, on the end table next to the couch, near the ashtray and the TV Guide. It’s an old Western Electric number—a throwback to the days before the dawn of caller ID. The phone we used to clamor over each other for, and answer with anxious anticipation, without knowing who was on the other end. It even has a wad of gum stuck to the bottom.

In a post-Packer’s-Winning-The-Super-Bowl Sunday afternoon daze, I was starved for a little entertainment, so I decided to bring the yellow phone to the Apple store with me, and walk around with it as if its technology was only slightly less advanced than say…the iPhone 3.

I don’t always think things through. That’s the problem. There’s the idea, which makes me smile, then, with a little luck, there are the eventual laughs, but somewhere in the middle things tend to get fuzzy. It seems technology—forward and backward—can cause quite a stir. Naturally, because it was a Sunday afternoon, the store was packed with customers. Maybe it was me, pretending to talk on the phone that caused all the strange looks, I can’t say for sure, but I will tell you this—that yellow phone made those customers uneasy in much the same way the VCR made my parents uneasy back in the ‘80’s. Look at that lady? Why does she have that? What is that? Is she actually talking on that thing? I don’t understand. Someone should call 911? It’s itchy there in the middle. My skin tingled and I started to feel like I had crossed the line—the one between laughter and lunacy—like I had walked into the Apple store, wearing nothing but that yellow phone and a MacBook.

If you’re already naked, really, what’s the sense in covering up? So I bellied up the Genius Bar, slammed the yellow phone down, looked the “tender” in the eye and said, “I’m waiting for a very important call. And when we’re done with the website stuff, I’d like to talk about a possible upgrade.”

He pointed to the phone, looked at his co-worker and said, “Hey, Dude, she wants to get a new phone. Can you transfer her information from that phone to the new one?”  Bless his heart.